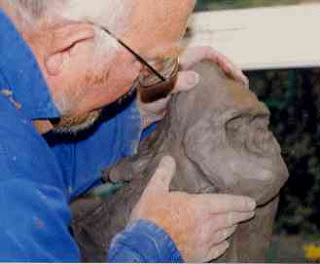 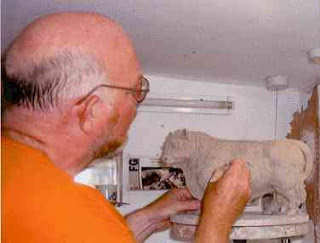 I am often about how I started making sculpture and students using my web site get in touch by email wanting some background information.  I have decided to use this blog to fill in some of the details. Have a look at the web site also http://www.animal-sculpture.co.uk/  and the new site http//www.hollingworth-bronze-sculpture.co.uk
So here goes..... 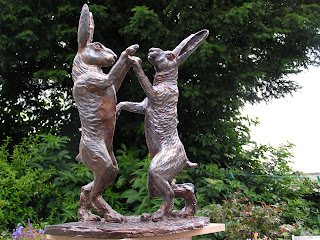 I have been working as a full time professional sculptor for the last 35 years. My work has been widely exhibited and is held in collections worldwide. I have studied all the animals I sculpts and regards knowledge of an animal as essential before creating any sculpture. I have sketched all his life and has a detailed knowledge of anatomy and the movement of animals. It is this intimate knowledge that gives life to the animal sculpture.

My aim in the sculpture is to to capture a moment if life in every work. All my ceramic animal sculptures are all one off originals. Recently I has begun to make bronze sculpture of his animals. These are cast in very limited editions and are very collectable. A small number of pieces are also cast in bronze resin
Every sculpture begins as a block of clay that is skilfully moulded into the animal form. I always had this ability to make forms from a very early age. It was something that was encouraged as a child so I guess it was an innate talent to see life in three dimensional form. I was formally educated in ceramics at the Art College in Sheffield and continued in the sculpture department of Nottingham Art College. However from these beginnings I has developed methods of my own. Each animal sculpture has its own problems and it is the solving of these problems that has kept me fascinated throughout my long career.

I was recognised early and in 1978 he won the Holbrooke Award from Nottingham Museum and Art gallery. This was followed by receiving the Best Craftsman in Show at the Royal Bath and West Show. During the show I was introduced to her majesty Queen Elizabeth and showed her his work.

My work was shown on the BBC during a lunchtime programme called Pebble Mile at One. It was this that launched my work to a wider audience. A number of commissions followed and work began to be exhibited in galleries throughout the UK. I was fortunate in being able to concentrate solely upon my creative work moving to my present studio in1996

My work has been exhibited throughout Britain in galleries but I now concentrates on showing work through own web site. Seeing the possibilities of reaching a wider public the site was launched in 1999. At this stage the internet was quite slow - sometimes called the 'World Wide Wait' However gradually the web site prospered and my work soon became known to a wider audience. The variety of commissions received through the web has developed my work and kept me always interested and challenged.

Posted by www.hollingworth-bronze-sculpture.co.uk at 07:35 No comments: